Song of Ore and Fire: the situation in the metallurgical industry

Right after the oil and gas industry, the metallurgical industry is one of the leading industries in Kazakhstan. There are many deposits of metal ores on the territory of the republic, such as iron, lead, copper, zinc, chromium, gold, aluminum, manganese and others.

Recall that in the framework of our earlier Scoring of Economic Sectors в metal ore mining is the most stable subsector in the primary sector with high indicators of development predictability, profitability, competition with imports and operational efficiency. The main driver of the economy with great potential in the secondary sector is metallurgical production, where, according to our assessment, the strengths are profitability, debt burden, competition with imports and operational efficiency. Thus, further development of metal ore mining and metallurgical production can affect good overall performance increase of the industrial sector and the entire economy development. 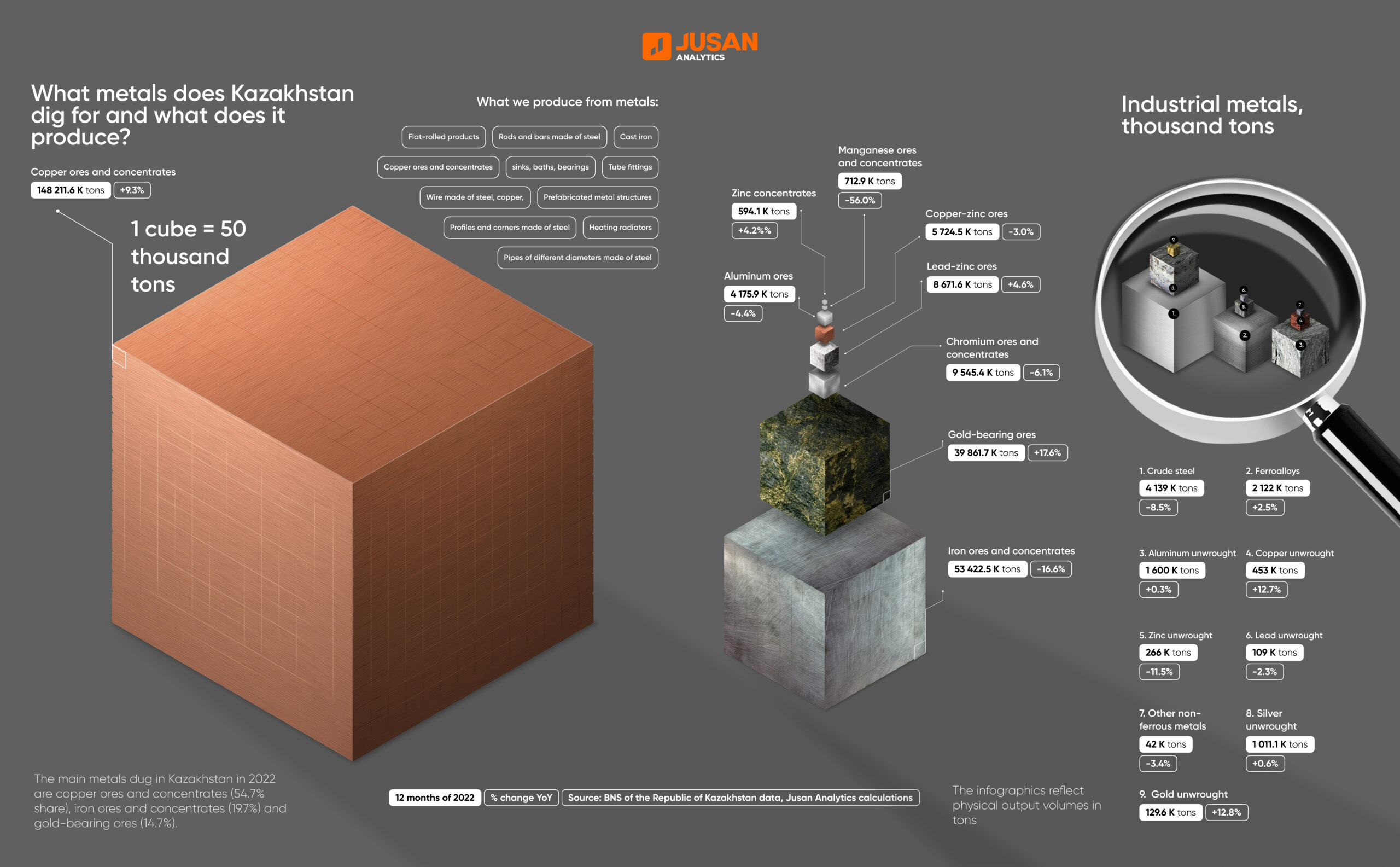 The infographics above show which ores are dug for in Kazakhstan, and which metals and finished products are made from them then. Thus, following the Bureau of National Statistics, we mainly dig for copper ores and concentrates (54.7%), iron (19.7%) and gold-bearing ores (14.7%).

The production of industrial metals is declining (-3.5%) due to the decline in iron ore output, which negatively affected steel production, which accounts for almost 50% of all metal production. Ferroalloys (with a share of 24.3%), aluminum (18.3%) and copper (5.2%) are taking second place. The stable growth dynamics are demonstrated by the production of precious metals, where the production of gold increased by 12.8%, and silver – by 0.6%.

The reason for such multidirectional trends in the metallurgical industry are geopolitical tensions, tightening monetary measures, reduced investment in the industry and escalating prices. In our opinion, this directly jeopardized the ferrous metallurgy industry, which was already suffering because of the decline of ferrous metals, iron ores and concentrates supply from Kazakhstan to Russia (the main buyer of these goods). At the same time, metals such as lead, zinc and copper are export-oriented, and only a small part of them is processed domestically, which also causes risks of dependence on external conditions.

We have already noted in our previous work on the industrial sector that the current global situation forces Kazakhstan to look for new ways of development and markets for its goods, as well as the need for the manufacturing industry development. At the same time, the situation in the metallurgical industry remains ambiguous. Kazakhstan manufacturers complain about the unavailability of raw materials and insufficient conditions for the development of the manufacturing industry, despite the existing agreements to provide them with raw materials at a price below the market.

And under these conditions, the Government recently began to consider the issue of introducing an encumbrance for raw material manufacturers to provide them with domestic manufacturing enterprises by 2026, since, according to the Ministry of Industry and Infrastructure Development, the capacity of domestic processors of key metals (aluminum, copper, lead and steel) does not exceed 50% in the majority.

We believe that the acceptance of such an encumbrance should positively affect the development of the metallurgical industry in Kazakhstan and is a good step towards ensuring stable economic growth.

In addition, we wondered how much of each metal can be purchased for 100 thousand tenge? 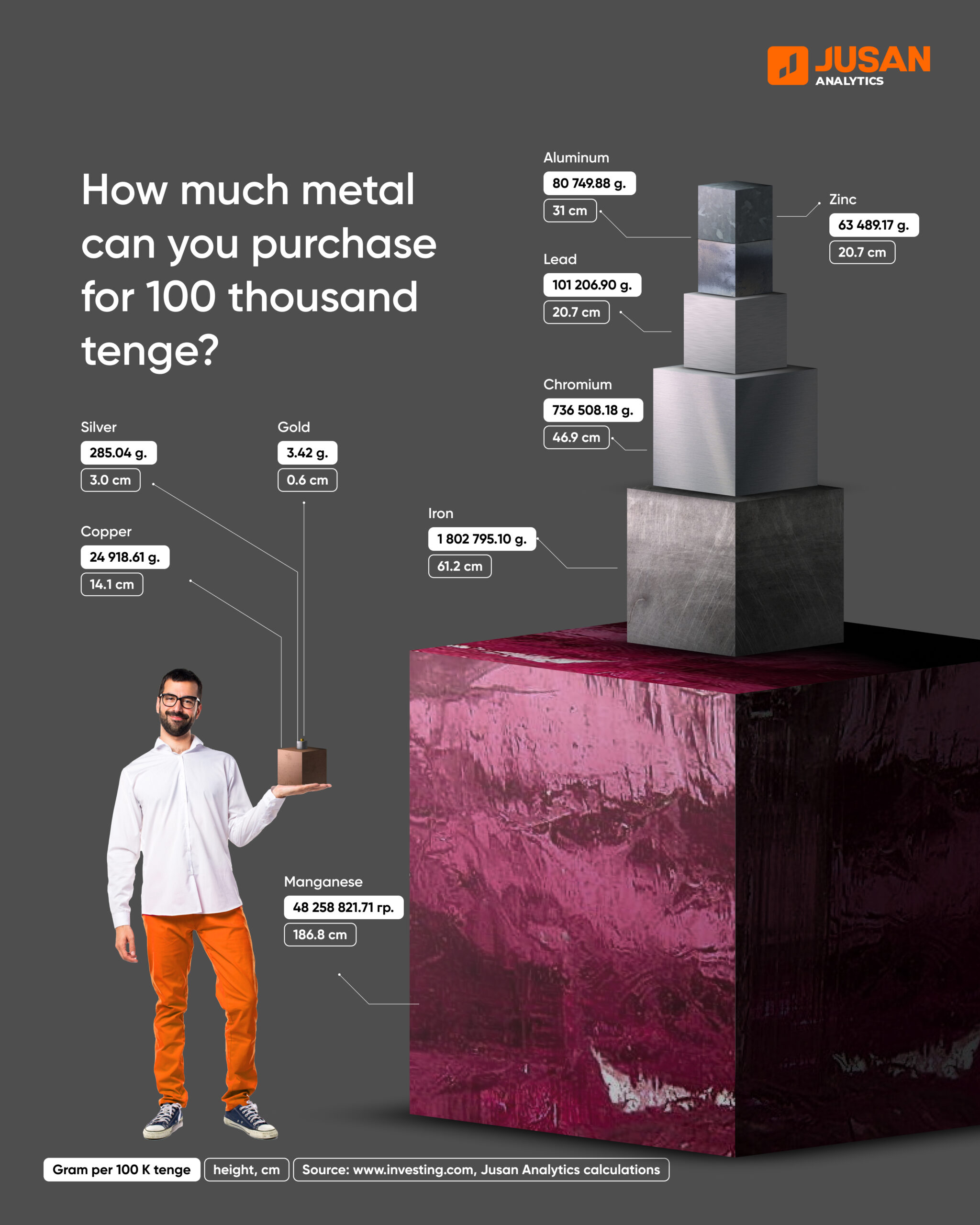