Old-new world order: inflation is the main factor in the economy again

The coronavirus pandemic and constant threat of new strains, reorientation of global supply chains, conflict in Ukraine, and anti-Russian sanctions provoke an unprecedented acceleration of inflation in the world. Over the past few years’ prices for metals, energy and food are at historic highs.

For example, in March 2022, the FAO (Food and Agriculture Organization of the United Nations) food price index rose to 159.3 points, which is the highest value since the index was founded in 1990. The surge in commodity prices inevitably reflects on the entire global economy: final products become more expensive, demand declines and business activity slows down in its key centers.

Leading central banks, which adhered to a wait-and-see position and attributed the price hikes in the world to seasonal and transient phenomena for a long time are now forced to implement a tougher monetary policy even at the cost of economic growth. Instead of an ultra-soft monetary exchange rate that is favorable for global growth the era of monetary conservatism is beginning in the world. The Federal Reserve System (US FRS), Bank of England, and the European Central Bank (ECB) will raise interest rates to rein in inflation, which is reaching alarming proportions.

Thus, the central banks of the world are returning to the traditional that is considered outdated notion of economic patterns: long-term policy of “cheap” money leads to an acceleration of inflation. Historically, an about-turn in monetary policy leads to a decline in global GDP and global economic activity, an increase in unemployment and appreciation of currencies, as well as a reduction in investment and a transition to more conservative stock market instruments. 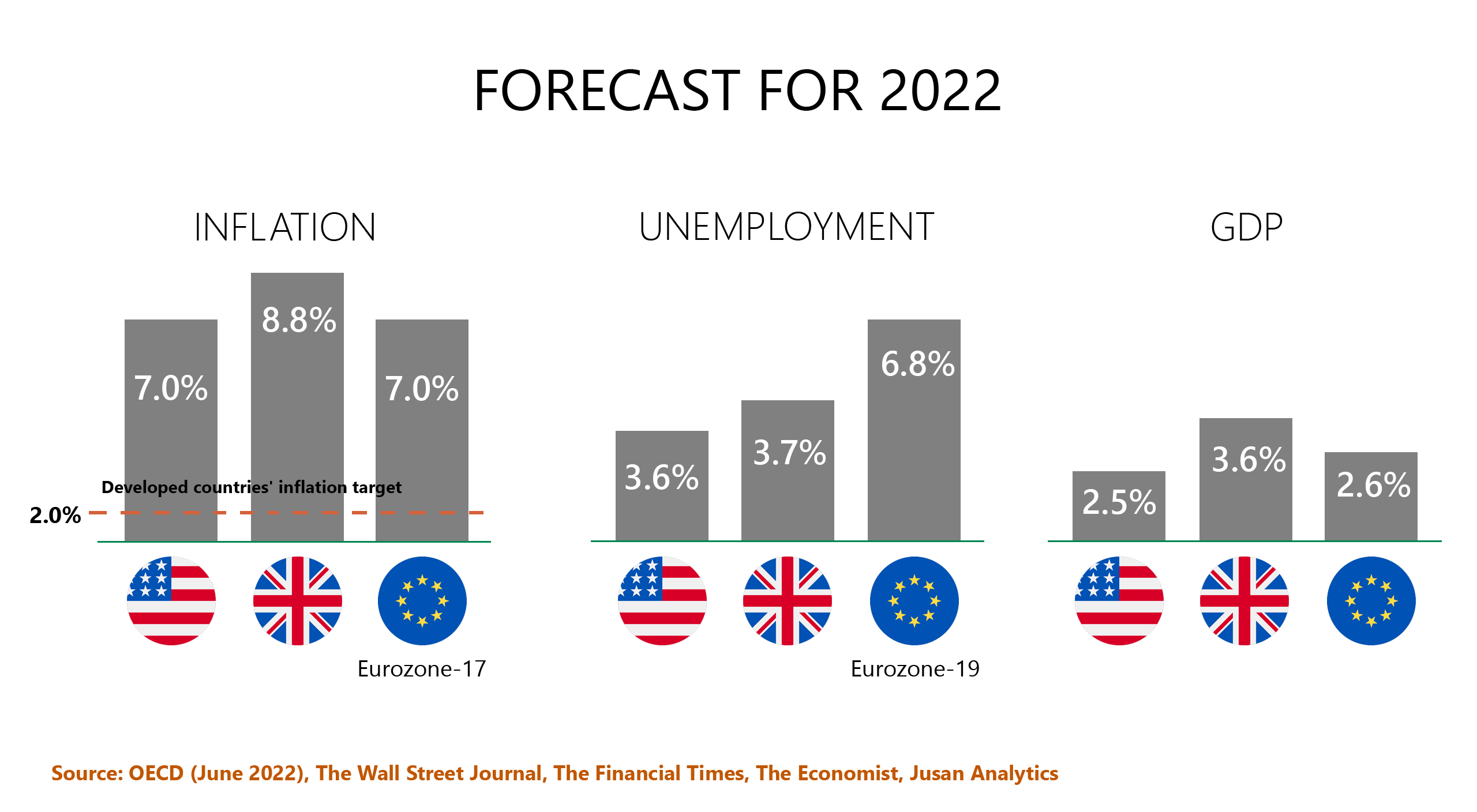 In May 2022, inflation in the USA reached a forty-year maximum, increasing by 8.6 p.p. in annual terms. Energy carriers made the most contribution to the growth of consumer prices. Thus, disruptions in global supply chains due to the war in Ukraine have led to an internal increase in fuel prices. In addition, in March this year, the United States completely abandoned the purchase of Russian oil, which comes to 8% of total consumption in the country. As a result, the average cost of gasoline in the United States exceeded $5.0 per gallon (= 3.78541 liters), with an increase of more than 60% compared to the same period a year earlier. According to the Organization for Economic Cooperation and Development (OECD), America is ahead of other G7 countries in terms of inflationary pressure on the economy.

According to the OECD estimates, the growth rate of the American economy will slow down to 2.3-2.5% in 2022, compared with 5.7% a year earlier. In 2023, the GDP of the world’s largest economy will increase by 1.2%. International organizations are also reviewing the prospects for the growth of the American economy downwards. Negative scenarios are caused by an increase in international geopolitical tensions, a record high commodity price increases, the curtailing of anti-crisis incentives, a decline in consumption and in investment due to growing inflationary pressure and tightening of the monetary policy of the US FRS soon.

At the June meeting of the Open Market Committee, the interest rates of the US FRS were immediately raised by 0.75 p.p. to 1.50-1.75%. In total, the US regulator has raised rates three times this year. However, the latest increase is the highest since November 1994 and acts as a powerful response of the American regulator to inflation. According to the majority of market participants, it has not reached its peak yet.

It is predictable that the US FRS intends to resist inflation by raising interest rates to at least 3.0% or even 3.375% in 2022. In addition, the Federal Reserve has also begun a program of curtailing monetary incentives by reducing its asset portfolio by $8.9 trillion.

In May this year, inflation in the euro area reached a new historical maximum of 8.1%. The last time such a price shock was 25 years ago. In several Eurozone member states, there is a double-digit price acceleration: in Estonia, it is by 20.1%, in Lithuania – by 18.5%, in Latvia – by 16.4%. The price hike in the Eurozone is caused primarily because of the military conflict in Ukraine – energy prices rose by almost 40%.

In addition, at the end of May, the EU countries approved the sixth package of anti-Russian sanctions, including an embargo on offshore oil supplies from Russia (2/3 of total imports). It also pushes the inflation bar to new peak values. According to the OECD estimates, the average consumer price index in the Eurozone in 2022 will equal 7.0%. However, there is a significant risk of a more negative inflationary scenario amid the uncertainty in the global energy markets and the geopolitical situation around Ukraine.

According to the latest OECD estimates published in June this year, the GDP growth rates of the Eurozone countries will drop to 2.6% in 2022 after an impressive 5.3% acceleration a year earlier. In 2023, the Eurozone economy will continue to slow down, increasing by 1.6% in annual terms. The deterioration of economic dynamics in the Eurozone is mainly caused by an upturn of economic, geopolitical, and energy risks in the international arena. The probability of negative scenarios for the euro block economy increases the following:

Changes in the geopolitical, energy and economic situation in the world, as well as increasing inflation risks in the Eurozone, lead to the need of monetary rate adjustment of the European Central Bank. Thus, having kept the base rate on loans at zero point following the meeting on June 9 of this year, the ECB Governing Council announced its intention to raise the base rate for the first time in 11 years in order to combat persistently high inflation. Among other issues, the ECB announced the possibility of raising the base rate by 25 points in July and again in September this year. The ECB’s policy will follow the US Federal Reserve System, which has already begun to change the exchange rate towards meltdown.

The consumer price index in the United Kingdom increased by 9.0% in 12 months to April 2022, compared with 7.0% in March this year. According to the OECD forecasts, inflation in the United Kingdom will rise to 8.8% this year and decrease to 7.4% in 2023. According to less conservative estimates, prices in the UK may exceed 10-11% by the end of 2022. The unprecedented rise in consumer prices in the kingdom is provoked by an increase in the cost of energy sources on world markets, an acute shortage of personnel in the labor market, and the destruction of existing supply chains.

The war in Ukraine has affected all countries either way. However, some subjects of the world economy found themselves in a more vulnerable and difficult situation than others. For example, the GDP growth rate of the United Kingdom has been revised downward more than twice to 3.6% this year. In 2023, the UK will be the only developed economy in the world with zero growth. The economy is slowing down by a combination of following factors:

Besides, new energy factors have been added to the traditional economic reasons that slow down GDP.  By the end of this year, the UK government plans to completely abandon energy sources from Russia, which will be a critical economic shock for London. Russia supplies 27% of coal, 11% of oil, and 4% of gas used in the country. Overall, the UK provides 36% of its energy needs through imports.

Bank of England still continues to consistently combat the growing inflationary overheating in the economy. Thus, following the results of the June meeting, the British financial regulator raised the key rate by 0.25 b.p. to 1.25%. It is the fifth increase since December last year. According to analysts’ opinion, by 2023 the rate of the Central Bank of England will reach 2.3%. And there was initiated the curtailment of the quantitative easing program. The Bank of England has stopped reinvesting the proceeds from the redemption of securities in new purchases of securities on the market.

Kazakhstan is not isolated from the impact of the revision of the monetary policy of the central banks of developed countries, turbulence in world markets, distortions in the global economy, and geopolitical instability.

The increase in world commodity prices returns as an inflation boomerang for the economy of Kazakhstan due to the high share of imports in the structure of domestic consumption. Thus, in May of this year, annual inflation in the country accelerated to 14% against 13.2% in April 2022. In terms of components, the growth rate of food prices in May increased to 19% YoY (in April – 17.9%). Read more about inflation in the paper “Price barometer (May 2022)”. In addition to global factors, the rapid growth of food prices within the country was also due to Russia’s ban on the export several food products to foreign markets, including the EAEU countries.

GDP
Kazakhstan’s economy is under the influence of converging external factors. On the one hand, the rise in the cost of energy sources, metals, and food products on world markets pushes the country’s economy to grow, since the republic is one of the largest producers and exporters of raw materials to foreign markets. On the other hand, the rapid growth of quotations on world commodity exchanges leads to a sales slowdown from the key consumer countries and also accelerates the growth in prices for goods that are actively purchased by Kazakhstan.

So, amid the price shock for oil, gas, coal, and other energy carriers in the world, developed countries are actively calling on the population to save energy and force the transition to alternative energy sources. Specifically, such initiatives in the energy sector are already being implemented in the European Union, which is one of Kazakhstan’s key trading partners. A record-high industrial metals price will also lead to a reduction in business and production activity in the developed centers of the world economy, which should also cool the demand for hydrocarbon raw materials.

70% of Kazakhstan’s oil is supplied to the EU countries (about 6% of total imports). Kazakhstan provides more than 1/5 (21%) of the EU’s demand for uranium.

In addition, geographical and economic proximity to Russia, which is the largest trading partner of the republic with a trade turnover of $ 24.2 billion at the end of last year, creates additional risks for Kazakhstan. Thus, according to various estimates, the collapse of the Russian economy as a result of paralyzing international sanctions is expected in the range of 8-12% in 2022, which cannot but affect Kazakhstan’s GDP due to the close economic relationships of both countries.

Kazakhstan also operates within the framework of global monetary trends. In response to the growing inflationary challenges, the base rate of the National Bank of Kazakhstan has been raised three times this year. On January 25, 2022, the National Bank of Kazakhstan raised the key rate from 9.75% to 10.25%. The following month, the rate went up to 13.50%, and at the last meeting on April 25 of this year it increased to 14.0%.

Similarly, with the US FRS and other regulators in developed countries, the National Bank of Kazakhstan operates in the suppression of inflationary shocks to the economy of Kazakhstan. It is expected that in the near future, Kazakhstan’s monetary policy will continue to be conservative as the preservation of inflationary pressures that is caused by an imbalance of supply and demand in commodity markets, geopolitical tensions around Ukraine, and change of supply chains.

The forced increase in key rates of the US FRS, Bank of England and the ECB will bring to the strengthening of the world’s leading reserve currencies, accelerating the outflow of capital from the emerging markets, which also includes Kazakhstan. As a result, there will be an additional pressure on the exchange rate of the national currency.