Wheat is the leading grain crop, it grows well in temperate climatic latitudes and gives an abundant harvest per unit of acreage. The high-quality flour obtained from wheat grains is used in the production of bakery, pasta, and confectionery products. In addition, it is used as a forage crop in livestock. The main wheat producers are the European Union, China, Russia, and India, accounting for more than 55% of the world’s production.

According to the FAO data for June 2022, global wheat production decreased by 0.8% over the year to 770.8 million tons due to a decline in production in Australia, India, Morocco, and Ukraine. At the same time, due to high prices, the world consumption of wheat is also decreasing – by 0.4%, as a feed grain, and for industrial purposes, it is used less. Wheat trade will decrease by 1.7% against the background of a reduction in exports from Ukraine as a result of Russia’s blockade of its ports, a decrease in exports by Argentina and Australia, as well as a ban on exports to India. Wheat stocks in the main exporting countries are at the lowest level in the last 8 years. World wheat stocks in 2022 will have decreased by 0.1% to 299.3 million tons.

As a rule, wheat prices decrease from spring to the July harvest and consistently increase in the autumn-winter period. This trend, regardless of weather conditions, is associated with the cycle of planting and harvesting wheat. Prices for the products of the old harvest remain high until the forecasts for the new harvest become known. Therefore, during the wheat trade period of the old harvest, grain prices are usually higher than before the new harvest. When the wheat of the new crop is already harvested, the supply on the market increases, and wheat prices decrease.

As a result, wheat prices vary depending on the supply and demand ratio in the market and the costs of its production.

Additional factors affecting the global price of wheat are the following:

Taking into account all the above factors, it can be assumed that the peak of wheat prices was overcome in April-June 2022. Nevertheless, the minimum level of wheat stocks, high prices for energy resources and fertilizers, drought in the European Union, and a reduction in wheat supplies from Ukraine will affect the preservation of high wheat prices. Thus, we expect wheat to continue trading in a wide range of 700-900 dollars per bushel (≈ 27.2 kg) with the likely achievement of the second price peak closer to the autumn-winter period.

According to the Bureau of National Statistics (BNS), more than 80% of all crop areas are wheat (12.9 million hectares). At the same time, the size of acreage in recent years has shown an average growth of 6% annually.

For 6 months of 2022, the physical volume of gross crop production in Kazakhstan had increased by 38% compared to the same period to 83.9 billion KZT. The decline in production in 2021 despite the increase in the size of the acreage was due to bad weather conditions.

If we look at the volumes, domestic production should 100% meet the domestic demand for wheat, which is processed by enterprises in the milling industry. Wheat is imported to use its seeds in sowing operations and for its further processing by flour mills. The main importer of wheat for Kazakhstan is Russia.

In 2021 alone, the volume of exports increased by more than 40%. Excluding trade turnover between the EAEU countries, the main importers of Kazakh wheat are Uzbekistan, Iran, Tajikistan, Afghanistan, Turkmenistan, and Italy. According to the EAEU trade turnover statistics, for 2021 Kazakhstan had exported wheat to the participating countries in an amount equal to 5 monthly exports to Italy for 2022. Despite the relatively small volume of wheat exported to Russia, Belarus, and Kyrgyzstan, there is a good dynamic of its growth.

According to data for June 2022, there is a reduction in the volume of wheat stocks in Kazakhstan. This is due to a decrease in the stocks of the old harvest wheat, while the new crop has not yet arrived at the elevators.

Against the background of a shortage of wheat due to supply disruptions, as well as export restrictions imposed by India, wheat prices have risen to a record $ 1,087 per bushel. Kazakh wheat has increased in demand as a result of the temporary shortage on the supply side. The Ministry of Agriculture of Kazakhstan has also introduced export restrictions on the export of wheat from May to the end of September 2022 to ensure food security in the country. The export will be carried out within the established quotas, wheat – 550 thousand tons, wheat and wheat-rye flour – 370 thousand tons.

Domestic consumption of flour milling products is fully provided by domestic production. However, Kazakh flour mills do not use domestic raw materials, but Russian ones. Amid the increase in the domestic wheat prices, Kazakh flour mills switched to Russian raw materials in the autumn of 2021, which turned out to be cheaper. Such behavior of millers allowed to reduce the price of flour from September 2021 – February 2022. However, since the beginning of the conflict in Ukraine, against the background of the temporary ban on the export of Russian wheat to the EAEU countries, the supply of Russian grain has stopped.

As a result of the ban, domestic wheat prices in Russia began to decline, which became an incentive for Russian millers to actively produce and sell their products in the most profitable direction for – Central Asia. Prices for Russian flour have become lower than Kazakhstan’s by $ 10.

These events have led to the fact that the Kazakh flour milling industry has experienced even more stress. Grain processors in March 2022 proposed to introduce restrictions on wheat exports aimed to support the domestic milling industry and increase its competitiveness. However, at that time the government did not support them. The restrictions requested by flour mills were introduced only in May 2022, when the growth of consumer prices for their products became higher than 30% in annual terms.

It should be noted that the shortage of Kazakh wheat, or its unavailability for millers due to the price factor, is not a new problem. Years of low wheat harvest in Kazakhstan have affected not only farmers but also representatives of the milling industry. Grain harvesters of Kazakhstan in 2021 gathered 17.1% or 2.4 million tons of wheat less than in 2020. Against the background of a low harvest and high prices, the volume of production of the flour milling industry decreased by 21.7% (-243 thousand tons of flour) over the same period, and exports decreased by 11.9% (-300 thousand tons of flour). Thus, millers send less and less flour abroad from year to year. At the same time, amid a backdrop of falling exports of Kazakh flour, its export to Uzbekistan is growing, which further processes and sells it to former importers of Kazakh processed products. 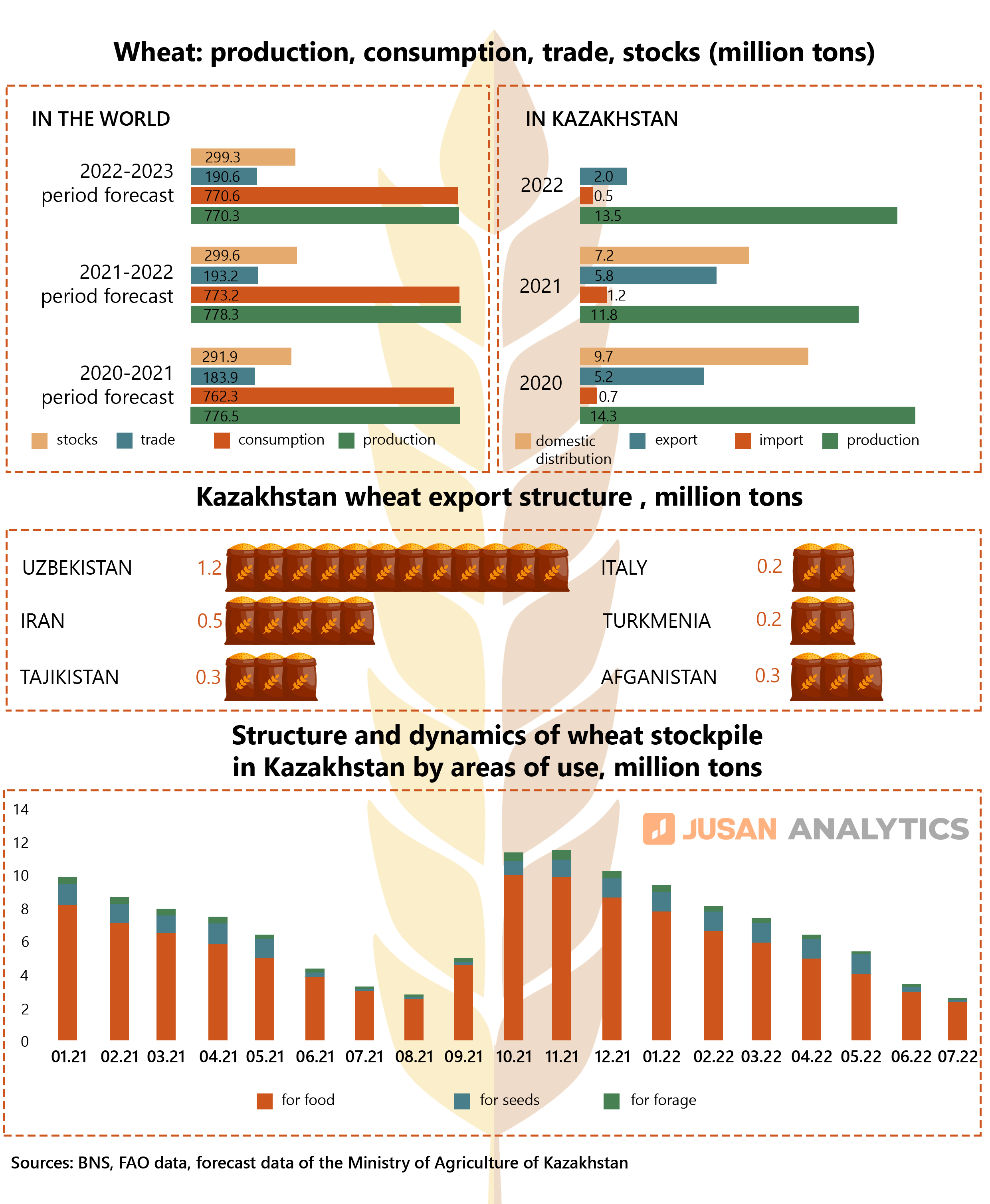