Kazakhstan is known to the world market as a producer of grain, primarily wheat. The priority for grain was formed back in Soviet times and, most likely, is dictated not by the efficiency of their cultivation in the republic, but by the need for a large country in food security. Further development in this direction was largely based on the principle – “because it has always been done this way.”

During the Soviet era (1986-1990), the yield of Kazakhstan wheat averaged 12.6 quintals per hectare. And even in this period before the collapse of the Union, the yield was higher than it is now.

In the 1980s, grain production in Kazakhstan was ensured by the intensification of production. 50% of the crop was formed due to the use of mineral fertilizers, 20% – due to the use of zoned varieties and 30% – due to compliance with technology. But due to organizational changes carried out in the agricultural sector this proportion is violated, also because of violations in the technology of cultivation of grain crops, price disparity and other factors.

Kazakhstan ranks 109th out of 130 countries cultivating wheat in this yield. Our country mainly grows soft wheat of strong varieties, which contains a lot of protein (gluten), but has a low yield relative to soft weak varieties. However, even among countries with comparable wheat varieties, Kazakhstan wheat has the lowest yield.

Table 1. The yield of wheat of various varieties in the world, q/ha

Table 2. Use of fertilizers, kg/ha

Kazakhstan accounts for about 2% of the world wheat trade. Wheat exports in the last five years have averaged 5 million tons per year.

The low yield of strong wheat varieties is compensated by their higher cost. Such wheat has baking properties due to its high protein content and can serve as an improver in the production of flour from weak varieties. Accordingly, the demand for it is higher than for more affordable weak wheat.

Strong varieties of soft wheat are grown in certain climatic zones. And only following a few countries cultivate these varieties: the USA, Canada, Australia, Argentina and Kazakhstan. At the same time, due to the unstable quality of wheat produced and its weak promotion on the world market, Kazakhstan is practically unknown to the world market as a producer of high-quality wheat.

The main consumer countries of Kazakhstan wheat are neighbouring countries from the CIS. For 20 years (from 2001 to 2021), Kazakhstan exported its wheat to 72 countries, but only 2 countries purchased Kazakhstan wheat throughout the period with stable volumes – Uzbekistan and Tajikistan. These two countries account for 60-70% of supplies. Another 7 countries buy Kazakhstan wheat relatively regularly, but in small volumes, for example, Turkey and Italy.

Firstly, it is necessary to improve the quality of wheat produced from the current grade 3 to grades 1-2 to change the situation. In addition, necessary to actively promote Kazakhstan wheat to the world market:

But are there any manufacturers interested in this? If the current state of affairs guarantees income, is the manufacturer or the state interested in actively promoting products for which it is necessary to spend large financial resources?

At the same time, we see potential. Take at least the land resources of Kazakhstan. As a rule, a significant territory implies a high agricultural potential.

Table 3. The area of the countries, their agricultural areas and arable lands, thousand hectares

Crop production occupies a little more than half – 52-54% of the structure of agricultural production in Kazakhstan. At the same time, as we noted earlier, the share of arable land is low – only 14% of agricultural land, which means that about 85% of the land is more suitable for livestock husbandry.

Division of areas by crops

Grain crops are the basis of crop production in Kazakhstan. They accounted for about 90% of the acreage until 2007. Then their share is gradually decreasing and has recently been about 80%.

The greatest reduction in acreage for major crops occurred in the first years of independence (1992-1996), and then the land use in Kazakhstan increased, but still has not reached the level of 1992. 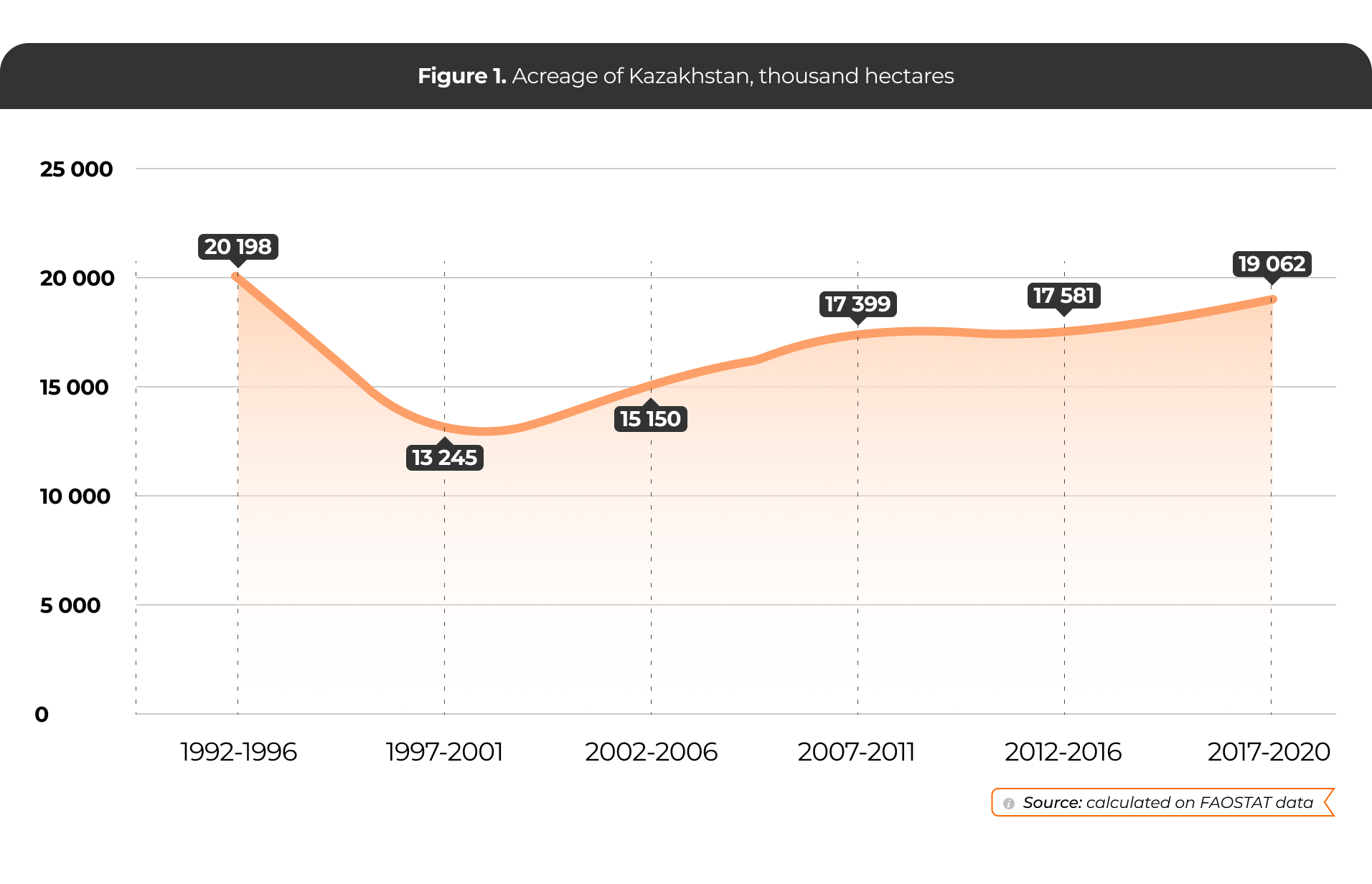 Oilseeds have been gradually winning back their share in the structure of the area since 2007. At the same time, the area for grain is not reduced, which indicates an increase in the use of arable land. 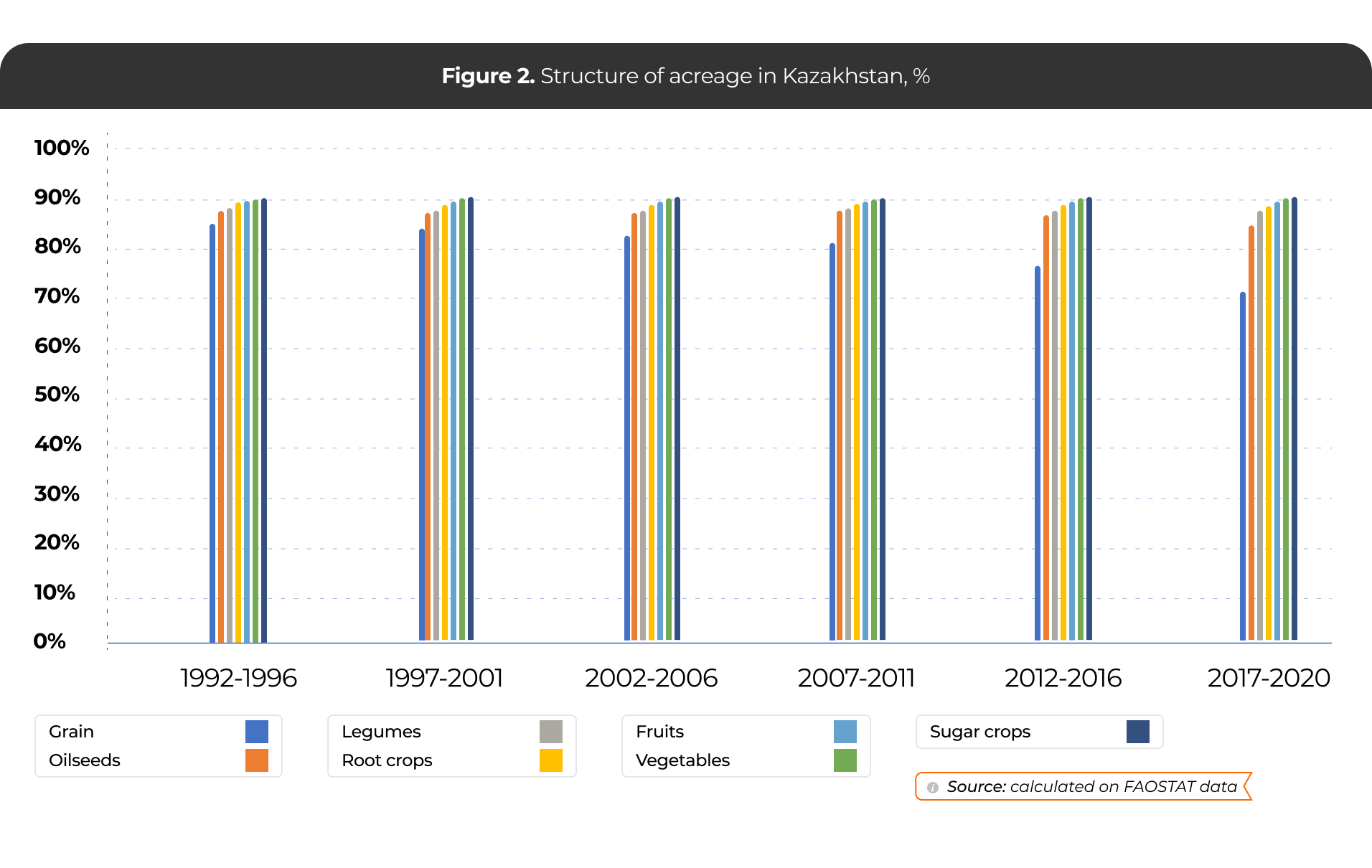 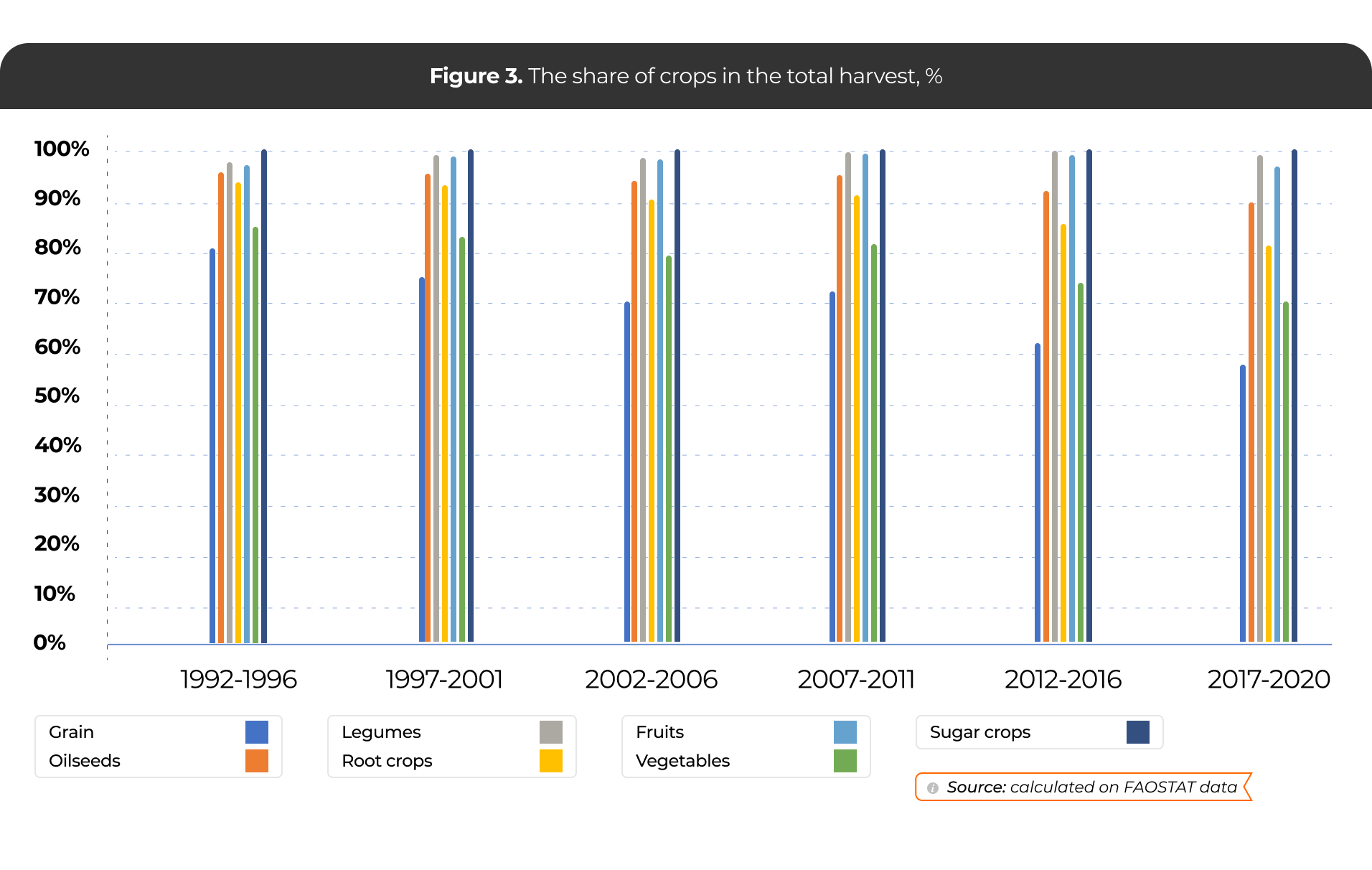 The yield of all crops has increased, but cereals are not the leaders of progress again over the past 30 years. They increased the yield by about 1.5 times, while vegetables and fruits by more than 2.5 times. 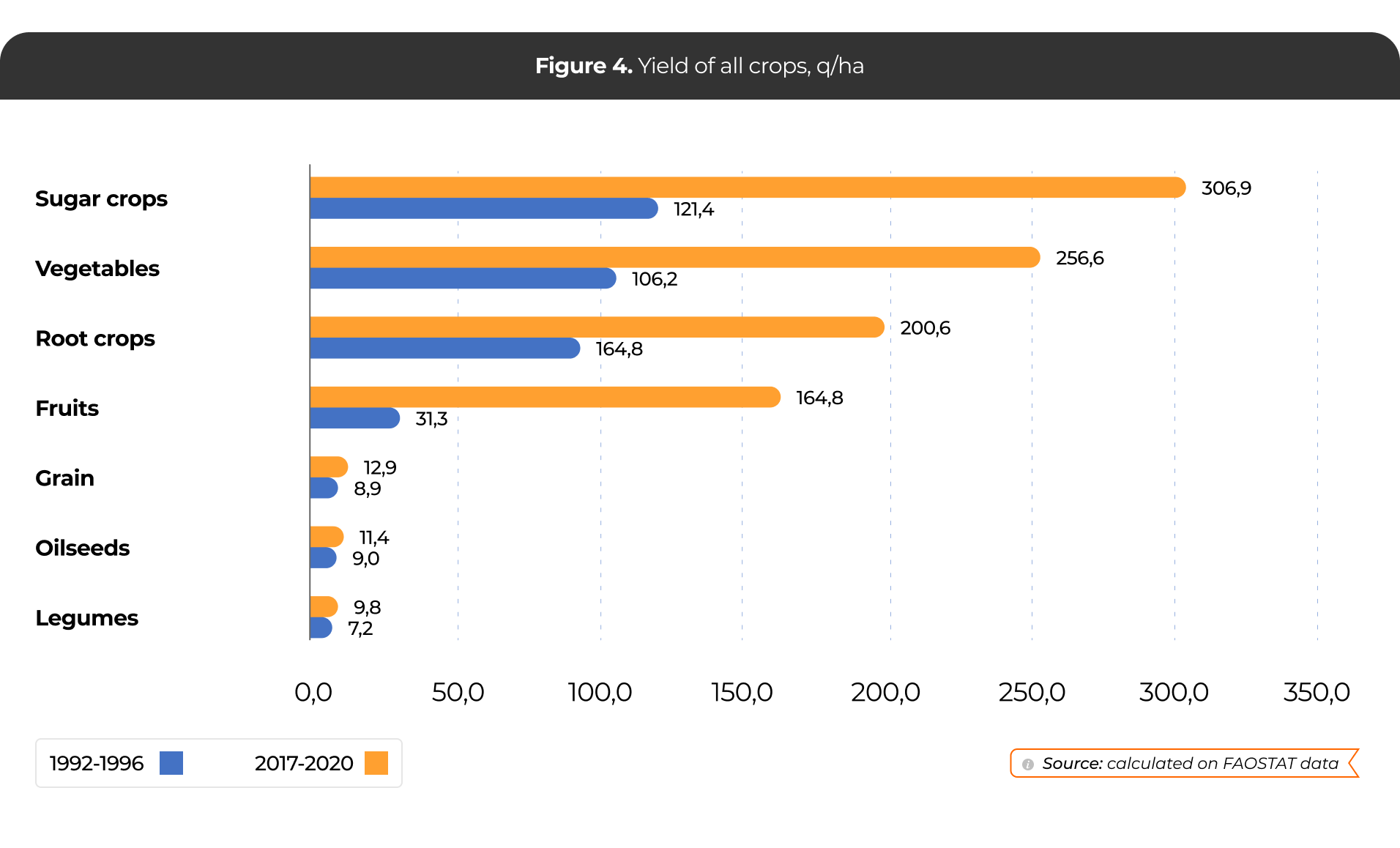 It suggests whether grain crops are the most effective for growing in Kazakhstan.

Tomatoes, potatoes, apples, apricots, etc. are significantly superior to wheat in terms of returns per hectare of acreage. Moreover, Kazakhstan imports most vegetables and fruits, although it could produce itself. But there is a certain complexity here. Now most fruits and vegetables are grown in the households of the population, extensively, not on an industrial scale, although we can see a great prospect for the development of such production.

If you look at the gross profit received from the sale of 1 centner of production, wheat is also inferior to vegetables and fruits.

Table 4. The volume of gross profit from the sale of 1 centner of production, tenge

Source: calculated on FAOSTAT and the Bureau of the National Statistics of the Republic of Kazakhstan data

Which way to go

Following the above data, wheat may not be the most effective crop in Kazakhstan and it is worth reviewing priorities in the structure of crop production or reconsidering approaches to wheat cultivation, to make it an effective and highly profitable product.

Based on the production and export of wheat over a long period, we can say that 10-12 million tons of wheat are needed to maintain the country’s food security. Kazakhstan can also produce this volume through extensive economic development, as it is now, without investing many resources in improving the quality and efficiency of the production. Consequently, it is possible to reduce the acreage used for wheat and switch to growing other more efficient crops.

Or we could go the other way: increase yields, and improve quality, while developing an aggressive marketing policy to promote goods to the world market.

Which of these ways is acceptable for Kazakhstan largely depends on the goals being set: to stop chasing the leadership in wheat exports and start actively engaging in other crops, or to try to make Kazakhstan wheat a pattern, which is not inferior to analogues from Australia and Canada that have land resources and climatic zones similar to Kazakhstan. Or maybe try to combine them?

392
We recommend reading
Articles
How has the US Federal Reserve’s interest rate changed?
7 November 2022
More
Articles
What is wrong with the industrial sector in Kazakhstan and why are we growing much more slowly than it could be?
6 October 2022
More
Articles
Cloudy with possible rainfall in the form of shock
25 August 2022