How did the World Cup affect tourist flows

Holding any large-scale sporting event implies considerable expenses for the country’s budget, and naturally, the host country expects to receive some benefit from its holding. The most popular thesis says that such events increase the awareness of the country, and the host cities and contribute to the development of tourism. Heritage plans are being developed for the infrastructure created for a sporting event – how they can be used in the future. However, tourism development is mostly determined by the already existing basic trend and the country’s position in the global tourist flow.

We have conducted a study on how the World Cup has affected the development of tourism. We have reviewed the last 6 championships, including the recently completed one in Qatar.

We have used the actual change in the tourist flow, which was smoothed from one-time emissions with logarithmic smoothing of the time series to measure the impact of the FWC on the development of tourism. And then the Hodrick-Prescott filter was applied to identify the trend and determine the potential level of tourist flow change of each country under study, which corresponds to the basic trend of tourism development in the country. The chart above shows the change in the share of tourist flow in index terms from the global volume for 3 years before and 5 years after the World Cup. We decided that using relative indicators is better than absolute ones. The case is that the latter may include additional factors, such as population growth, the geopolitical situation and several others, which will be a logical reason for changing the tourist flow.

The 2002 FIFA World Cup was held simultaneously in South Korea and Japan. The World Cup has not significantly impacted these countries: neither short-term nor long-term changes in the share of the world tourist flow were observed. Thanks to the popularity of anime, doramas and K-Pop music, these two Asian countries attract quite a lot of tourists. And in addition, medical tourism is well-developed in Korea. The dynamics of tourist flow growth in these countries have always been near the potential level. 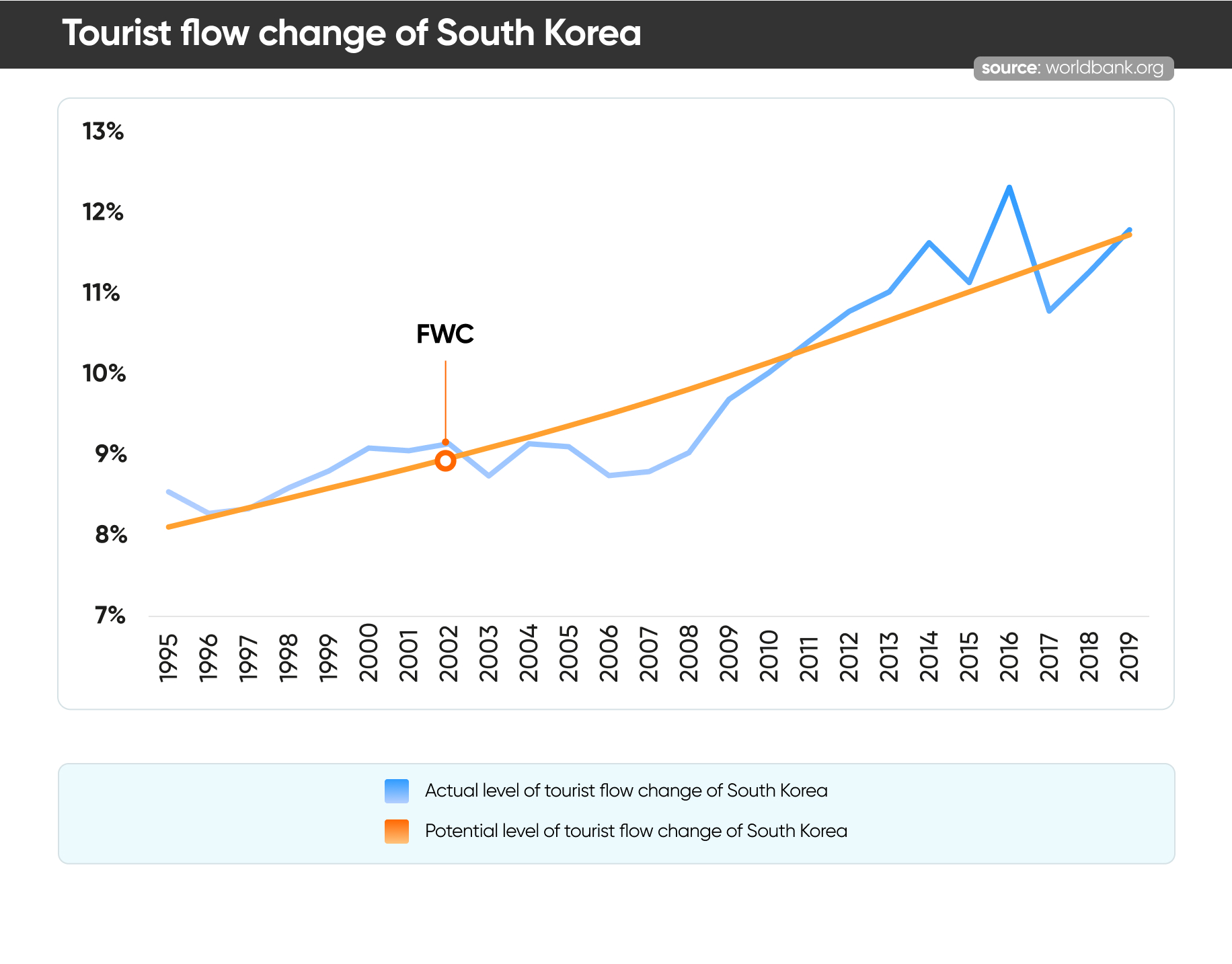 The tourist flow change in Germany was also not related to the World Cup. At the time of the event itself, the share of tourist flow was significantly below its potential level. And it should be noted that the period after the World Cup was the period of the 2008-2009 global crisis, which in turn could have an impact on the trend of the actual dynamics of the tourist flow share from the potential level, including ignoring the Championship. In addition, Frankfurt is the world’s “alpha city”, which is the centre of commerce, culture and transport hub, providing Germany with a high level of tourist flow throughout the research period, which can greatly distort the effect of the sport event impacts. Moreover, Germany is located in the very centre of Europe and has a stable flow of tourists from the European Union. 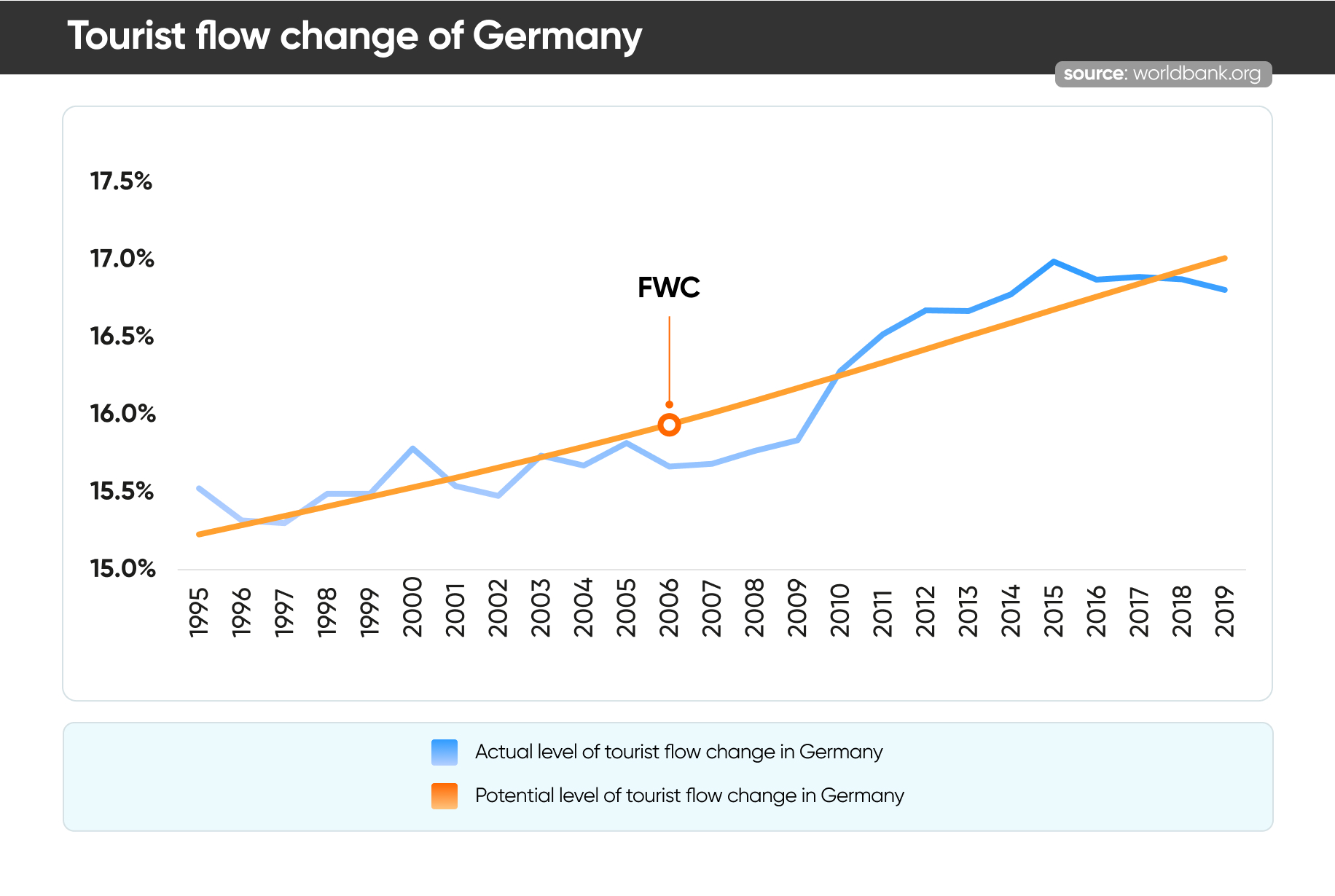 The Republic of South Africa is the most striking example of the positive effect of the Championship, demonstrating a noticeable improvement in tourism after the event. It should be noted that the country was quite a popular destination in Africa due to its beaches, nature reserves, geographical location and developed tourist infrastructure even before the World Cup. Brazil has been the most popular tourist country in the world for a long time. The reason for this is the world-famous Brazilian carnivals, beaches and picturesque nature, which attract not only tourists but also all fans of festivals and surfers. The level of tourist flow experienced a short-term positive shock during the World Cup, and then the indicator returned to its potential level. The level of tourist flow change in the Russian Federation was negative 2 years before the Championship and remained at the same level throughout the research period. Can be assumed that the decision to hold the World Cup in Russia was connected precisely to increasing the recognition and popularity of the country as a tourist destination. However, we can see that this did not help the country and the change in the share of the global tourist flow maintained its downward trend. 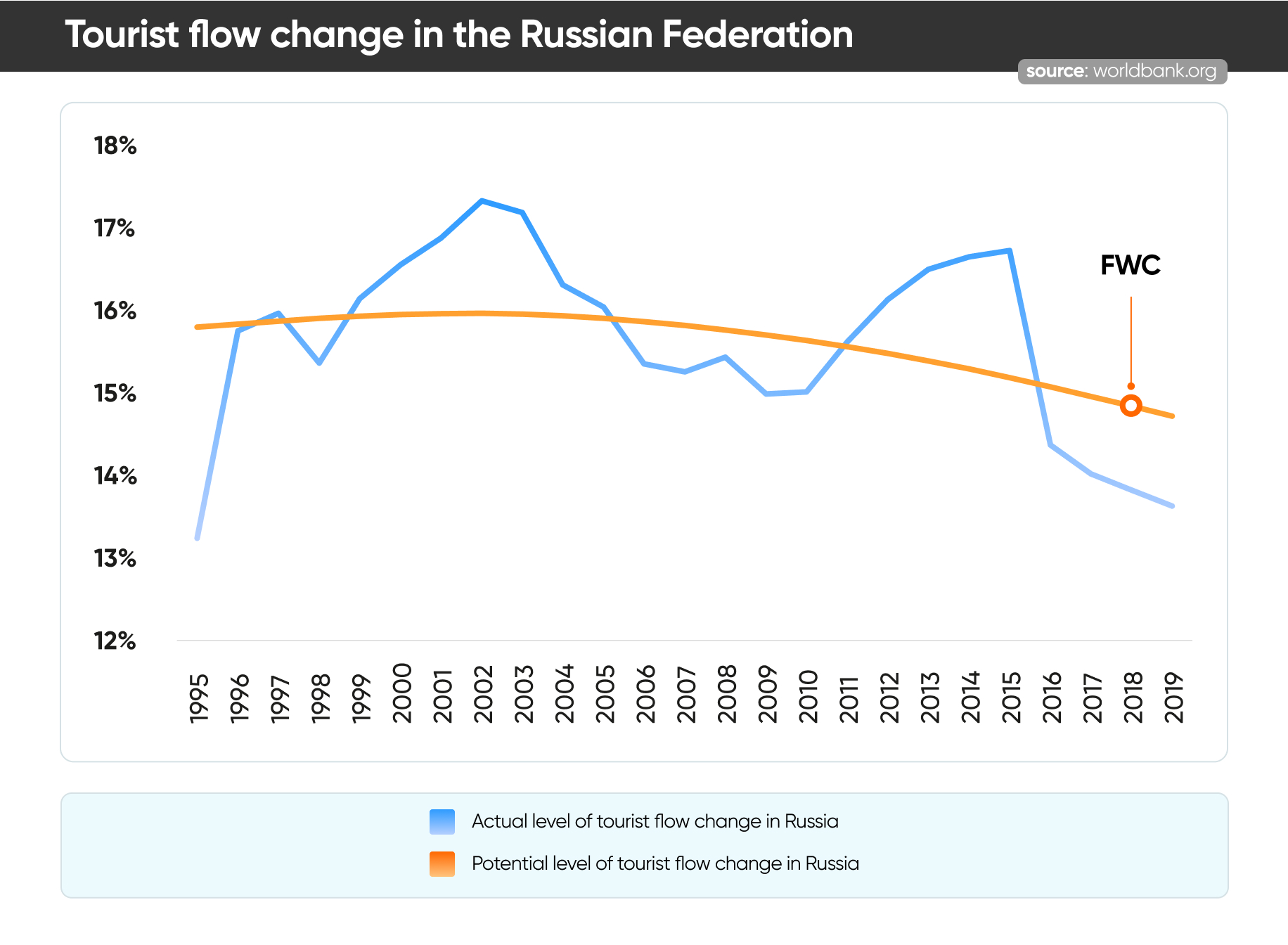 The impact of the World Cup on five countries

Following the data obtained, we can conclude that holding a sports event in developed countries does not affect the tourism development level and the growth of tourist flow, which already completely coincides with its potential level. Holding the World Cup also failed to shift the rather strong underlying factors of tourism development in Brazil.

And for countries with a low level of tourist flows, the World Cup can have a positive impact if there are strong basic conditions for tourism development, for example, access to the ocean and a favourable climate. To name few, holding the World Cup did not help the Russian Federation, but it had positively impacted tourism in South Africa.

In general, holding a large-scale event can only be a good complement to the overall tourism development program, and not the program itself.

What will happen to Qatar?

Qatar is visited by quite a lot of tourists, but they mostly fly by the popular Qatar airline and interline in Doha. But we see that since 2017, the level of tourist flow has begun to decline relative to its potential level. The decision to hold the 2022 FIFA World Cup is most likely pushed by the desire to return the tourist flow to its potential level and neutralize the negative impact of the lockdown period.

In general, the trend repeats the Brazilian scenario of changing the tourist flow: it will return to its potential level in the long term after a small surge during the World Cup.